About ken & Grind Organization
Ken Ayugai was born 1970 to a Japanese father and German mother, near the ?sh market in down town Tokyo. Soon after birth, his parents took him to be raised in Riverdale, N.Y. until the age of 9. Thereafter he spent most of his youth in Tokyo, except for one year in 1986 when he returned to New York and started his ?rst band at the age of 16. After his return to Tokyo he entered the prestigious Gakushuin University, the designate university for the Emperor's family, where he studied law while playing in a Heavy Metal band. His band "Bump'n Grind" released two albums before their split up in 1999. During his University years, Ken also made his TV debut in 1993 as one of the ?rst VJs of the newly established MTV Japan. He has been an active player in the Japanese entertainment industry ever since as Musician, Actor, Radio DJ and TV personality, etc.
大好評につき、今月は2夜連続で放送決定です！
題して『EX THEATER特番〜命の音陣〜』！！
入手困難なチケットを手に入れるチャンスです！
また、赤い公園、アルカラ、OKAMOTO’S、グッドモーニングアメリカなど、都市型フェス「GO LIVE」出演アーティストがオーナーを務める「音カフェ」もオープン！
鮎貝がお酒の力を借りて（？）アーティストとぶっちゃけトーク炸裂でお送りします(^^)/♪
12月20日(金) 28:26～
12月21日(土) 27:50～
テレビ朝日にてオンエアー！お見逃しなく！！
EX THEATER
OFFICIAL SITE→ http://www.tv-asahi.co.jp/ex-theater/ 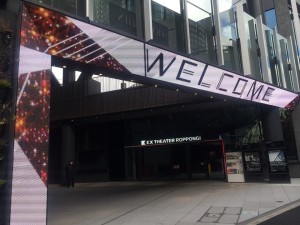